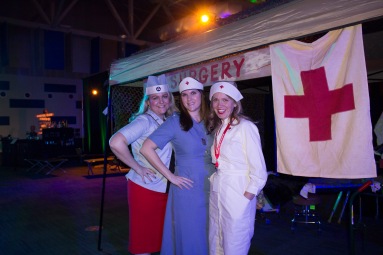 The first annual BASH benefit – A salute to service, took place on Saturday April 2nd, 2016.  Inspired by the TV series MASH, the McClellan conference center whisked the guests away to another era.  Military Jeep escorts to and from the building, dog tag souvenirs, and the Peter Petty Orchestra set the scene for an evening dedicated to celebrate and honor the military and the important work of the Service to the Armed Forces (SAF) program in the Gold Country Region.

The Red Cross SAF program has served more than one- million military families since 9/11,  helping them prepare for, cope with, and respond to the trials of military service.

Close to 300 guests came together to honor three local Korean War veterans. LTC Robert Burns, Richard Austin, and John Murphree Lowery; as well as Susan Savage, who received the Spirit of Tiffany award for her philanthropic work in the Sacramento region. 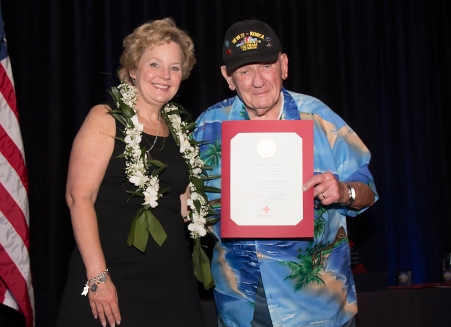 Events like these have a hand in getting the word out to those who can help. LTC Robert Burns stood in service to our country during three wars, he enjoyed the evening with his wife Beverly, “many Korean War veterans have been forgotten,” said Robert Burns.  His work with the Elks lodge, in conjunction with the Red Cross, spreads awareness to our community, as well as to those veterans unaware of the resources these organizations provide.

“We hope to create an event that is accessible to everyone in our community, in a fun, loose, and open environment,” explained Gary Strong, CEO of the American Red Cross Gold Country Region. This expands the neighborhood of people dedicated to honoring the men and women who have, and continue to protect our country. 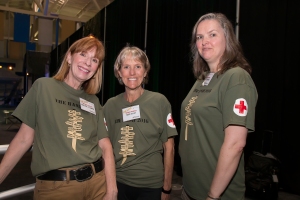 Guests went to great lengths to pay tribute to the MASH inspired theme. Jeffery and Eleanor Snively took this very seriously, researching costumes to procure an accurate “Hawkeye” character. He and his two sons, who serve in the Army, are passionate about spreading the word, “people are forgetting,” said Jeffery Snively, BASH attendee. Jeffery and Eleanor’s attendance tonight is indeed an example that he and his family are breathing life into the SAF program. With the table set for one on the stage, in memory of those who didn’t return home from battle, the guests reflected on how important the work of revering those who endured the greatest sacrifices are to this great nation.

In compliment to the lovely evening, David Sobon led the auction, where attendee Dennis Smith bid and won, ‘Sutter’s Gold’, a painting by artist Greg Kondos. His father was stationed at McClellan, his mother worked on base as well. He was led to bid, as if completing a circle, started by the contributions his parents made. His enormous smile indicated his wish to honor them, and all those who serve, has been granted. 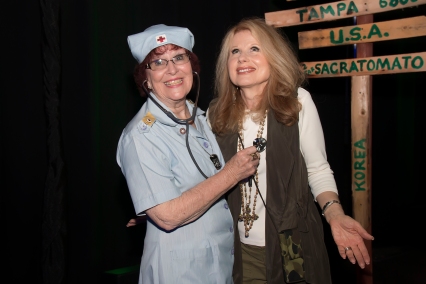 Much like the TV show in which was revived at the event, the stories of those who lived to tell the tale of the Korean War, remind us that we can all be called to honor those who valiantly pledge to protect our country. Volunteer. Donate. Spread the word. The SAF and the American Red Cross provide a platform, which allow us to appreciate, in whichever way we can, the men, women, and families, of our military, so no one is ever forgotten.

Check out all the fun we had at The BASH 2016 on our Flickr page.