It’s been two months since the Camp Fire started, and Red Cross is still sheltering almost 700 people (plus pets) in Chico, CA.  Watch this video for a quick recap of all that’s going on.

This Native American History Month, we’re highlighting those who play a pivotal role in helping the American Red Cross accomplish its humanitarian mission every day in tribal communities across the country.

Here is a conversation we had with her around Native American History Month and our work with tribal communities.

The global Red Cross Red Crescent network’s 2018 World Disasters Report: Leaving No One Behind spotlights the global challenges involved in delivering aid to the most vulnerable people—along with solutions to help humanitarian actors better reach communities around the world.

Imagine if your town had suffered catastrophic damage in a storm but emergency responders and aid workers couldn’t get there to help because your community wasn’t on any maps.

While this may seen strange to Westerners, it’s a real problem in other parts of the world.

To help get relief into people’s hands, the American Red Cross and partner organizations have joined with the Missing Maps project. Using OpenStreetMap, volunteers have put millions of people from high-risk countries on the map since 2014.

This makes a lifesaving difference for disaster workers combating deadly health crises like the 2014 Ebola outbreak in West Africa. And when a 7.8-magnitude earthquake ravaged parts of Nepal in 2015, volunteers worldwide sprang into action to map affected communities and roads to support relief efforts on the ground.

But much work still lies ahead to put more families in the world’s most vulnerable communities on the map—before disaster strikes.

On Thursday, November 1, Red Cross volunteers from the Gold Country Region will join with our partners at Intel in Folsom for a a Mapathon session. Our volunteers will be among about 50 people working together on the day’s mapping challenges.

You can help too! All you need is a computer and an internet connection. Volunteer at home, attend a mapathon or host one with family and friends.

If you are intersted in volunteering with the American Red Cross or to make a donation, visit redcross.org or call 1-800-RED-CROSS.

Derek was sitting on the back of his truck on the main street in Marianna, Florida earlier this week. He and his mother, Charlotte, are from Pensacola and were affected by Hurricane Ivan several years ago. They were caught unprepared. 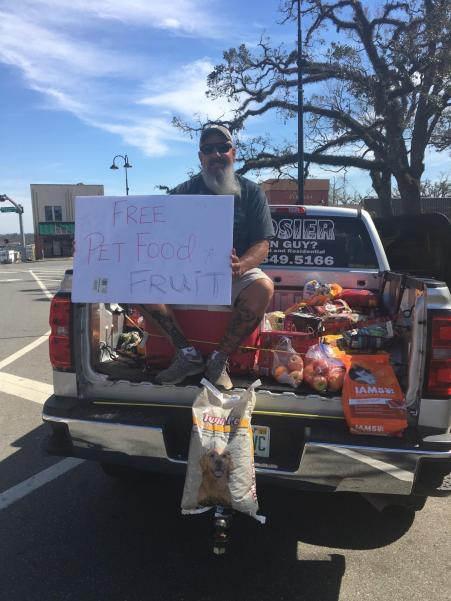 Derek vowed then that he would never again be caught unprepared and would be ready to help if a hurricane ever came to Florida again. He has a soft spot in his heart for animals and knew that was an area of need that he could help with.

Derek and Charlotte collected more than 250 pounds of fruit and pet food from his car club, church and community members. For the past two weeks they have driven down to Tallahassee to give it away to anyone in need.

The mother and son have been driving around the back roads of affected areas where there is still no water, no power and, in some cases, clearing of the roads has not begun.

They came upon one house that had been evacuated but still on the property were foru dogs and five puppies that were left behind. Derek dropped three bags of dog food to which all of the dogs came running because they were starving.

Once I heard this story I could not leave without making sure the dogs were rescued.  We drove to the local animal control office where I met a gentleman named Ken. He was not an animal control worker, but happened to work next door.

None of the animal control people were there. I told him the story and asked him if he had any suggestions on how I can get someone out to the house to save the dogs. He got on the phone and called Karen who was a friend of his. I gave her the information and she promised that she would get someone out there.

As we were driving away, Ken drove up in his car getting our attention to let us know that the house was in a different county. I asked him if he had any contacts in that county so I could get help. He and Karen told me they would coordinate with the other county’s animal control department and they promised that the dogs would be taken care of.

Because of this mother and son team from Pensacola who were down here just to help, this Red Cross volunteer who believes no animal should be left behind, two local individuals willing to help, and the coordination of two county animal control groups, these dogs will not be forgotten and the puppies will have a chance to live a full life.

If you would like to contribute to the American Red Cross Hurricane Michael disaster response, visit redcross.org or call 1-800-RED-CROSS.

Stacey Shell is a Gold Country Region volunteer. She is on her first-ever deployment to to assist those affected by Hurricane Michael.