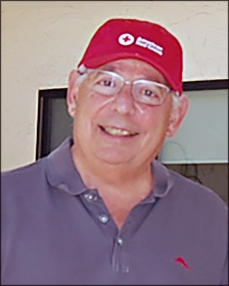 Peter joined the Red Cross after retiring from a career as a human resources consultant and a CEO. Originally from the East Coast, Peter moved west to be closer to his family and to eventually became part of the Southern California Region family.

As a member of the National Virtual Lodging Team, Peter works one of the more difficult assignments of a disaster response. Working closely with Red Cross partner CLC Lodging, Peter manages all lodging requests and matters related to housing for both Red Cross workers and those we serve. Due to the COVID-19 environment, the preference for non-congregate housing options has placed a tremendous demand on the lodging team’s expertise and workload.

“Working virtually is not as easy as people might think,” Peter reflected. “Even though I can do chores around the house and go grocery shopping, I am on the phone 14 hours a day.”

Peter’s whirlwind schedule began early in the summer.  In June, Peter came on board to arrange lodging for the Red Cross response to the Minneapolis St. Paul civil unrest. Shortly after, Peter’s efforts turned to support the wildfires in Arizona and New Mexico. A month later, Hawaii’s Hurricane Douglas displaced local residents and sent Red Crossers to the islands, all in need of lodging. Come August, Peter donned the manager hat for the Apple Fire Temporary Evacuation Points, before resuming his lodging duties for the Northern California wildfires.

“It’s emotionally trying when you hear people’s circumstances,” Peter said. “When I hear of people sleeping in their cars, I am determined to secure them a room.”

When asked if he plans to skip the next possible disaster to take a little time off, Peter was hesitant about his answer.  He acknowledges that the Lodging Team is a small cadre of specialists. However, with the possibility of more wildfires and hurricanes on the horizon, Peter says he plans to take time off and recharge before accepting his next virtual assignment.

The American Red Cross remains committed to providing shelter, food and emotional support to victims of disasters. If you are in need of shelter or would like to learn more, call 1-800 RED-CROSS or visit redcross.org or cruzrojaamericana.org.