Elizabeth and John Driver had just 15 minutes to get out of their house before it was consumed by the Camp Fire. They escaped with just the clothes on their backs, and their special little friend, their dog, Brandy. 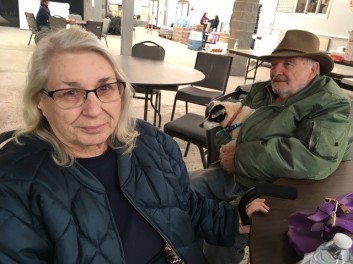 Mr. Driver spoke to me as Brandy snuggled in his jacket on this chilly afternoon at the Red Cross shelter, at the Church of the Nazarene, in Oroville. Mr. Driver proudly announced that Brandy is a “working dog,” not officially trained, but still, she’s a worker. Mr. Driver has blood sugar issues and Brandy wakes him up when she senses that Mr. Driver’s sugar levels are off.

Mrs. Driver said after they escaped they were happy to find the Red Cross shelter. They didn’t have warm clothes, in fact, they had nothing. Once they arrived at the shelter, things started to look up a little for them. “The Red Cross is fantastic!,” Mrs. Driver said, “They fed us, they clothed us, they’ve been really wonderful.”

Sadly, the Driver family is going through a lot. Their daughter also lost her home to the fire. She and her children are at a Red Cross shelter in Chico. But the Drivers have a potential plan and they are optimistic. Their son lives in Washington state, so they are considering making the move to Washington, once they get things taken care of here.

The Drivers have given help to many people in need over the years, but this is the first time they have been in need. Mrs. Driver says it’s been very humbling. Yet, like so many here at the shelter, the Drivers are thankful that their family (including Brandy!) is safe.