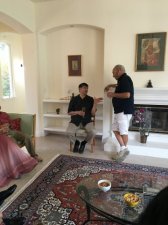 I have the most generous friends.

Gita and Sridhar Iyer donated an Indian fusion vegetarian dinner to the Red Cross Bash, which was held last April. Then, two other friends Hari and Anu Reddi decided to bid on it no matter how much it cost. After a fun auction by David Sobon, the Reddi’s held the highest bid at $2500 for an intimate dinner for eight of their closest friends.

Two months later, the Reddi’s hosted an unforgettable night with amazing food, great company, laughter and joy. They set the tables overlooking the El Macero Golf Course, in Davis. Gita brought her fine china and the Reddis served a different wine with each course.

We were served pappadum cups with homemade cheese as an appetizer, followed by avocado and bean salad. We loved the asparagus soup, the yoghurt rice, the pomegranate rice sticks, which were my favorite.

And they closed the amazing five-course dinner with rose ice cream… a perfect finishing touch to an unforgettable meal.

Mohini Jain, another friend of ours , bid on a tour of the airport . I hope that her tour will be equally memorable .

Check out the unbelievable, mouth-watering menu we got to enjoy. This would not have been possible without the Red Cross Bash, hope you attend in 2017 and bid on a similar item! Or if you are a very good cook, you can donate a similar dinner!

The lassi that was served between the appetizers and the main course was flavored with organic curry leaves.