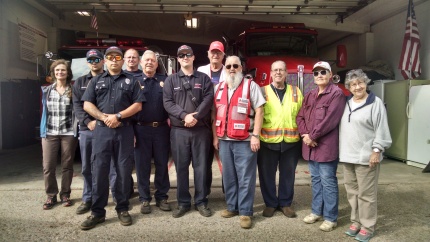 We had a great day today. Spent a lot of time at some of the homes, didn’t reach our goal of 75 however, it was a successful day. We installed smoke detectors into homes that had mainly elderly and most of them had no smoke alarms. So it was a good day.

We had help from the Westpoint Fire Department, Mokulumne Hill CERT team and Red Cross volunteers.

Chief Jim Carroll spent the day with us, going back and forth between the two locations, Dunroven mobile estate in Westpoint and Blagen Rd in Wilselyville.

Chief came inside and met with many of the residences and spent time talking to them. It was greatly appreciated.

We installed:  42 smoke alarms, 17 CO monitors and 9 Batteries.
We went over evacuation plans even in homes we didn’t need to install smoke alarms. The residents of those homes were very grateful and said they had not thought about their own home needing to evacuate because of a fire. I think that was the best part, they were so engaged in learning how to escape their own homes.

O today, it was a success.

We all are looking forward to our next canvas.

The canvassing event in Calaveras County, was just one in a few that occurred within the region. Volunteers were also out in force in Sacramento  and were able to install more than 100 smoke alarms in the Oak Park and Del Paso neighborhoods.
Check out how the Service Delivery Stats (October 2014-January 2016) of the Home Fire Campaign nationwide!!

Next weekend, we’re up in Redding!! Here we come!

As you know, our friends and neighbors in Amador and Calaveras counties endured a relentless series of devastating wildfires this past summer. Today, our work continues, where Red Cross staff and volunteers continue to collaborate to ensure residents have the extra assistance they need to rebuild, not just as individuals but as a whole community, too.

Click HERE to read a six-month Stewardship Report that provides a first-hand look at your generously donated dollars at work, detailing our continued support and recovery efforts in the community.

Thank you for your support and commitment to help those affected by these wildfires. Your generosity makes the hope of recovery possible at a time when people need it the most.

Below is a video that resumes our work over the last six months.

On April 21, Red Cross supporters will join together for the second annual Giving Day to make a difference for thousands of families impacted by emergencies. Will you help to spread the word about this incredible day? Sign up to be a Giving Day Social Ambassador today!

Once you join as a Social Ambassador, we’ll share special updates you can post to make sure your friends and neighbors know how to get involved on Giving Day.

Last week, the students of Adkinson Elementary were in for a real treat – Career Day! I know, I know. Career day isn’t exactly a new thing, and everyone has been to one during their school years – and they might have been quite dreary – but this isn’t your grand papi’s career day!

The two assemblies – one for K-3 and the other for 4-6 – hosted presentations by a former principal, a marine biologist, a tae kwon do instructor and last but certainly not the least, American Red Cross. Yes my friends, THE American Red Cross was in the house!

Veronica, a Red Cross employee, presented an awesome and engaging power-point presentation about what the Red Cross does and how they help people. She even engaged the younger kids by telling them why she volunteers and how the “red cross” is like the bat symbol. As you can imagine, they were many “oooh’s”, “aaah’s” and “Superman is better” comments. Nevertheless, the kids were told that when the “red cross” appears, help is near! (see what I did there?)

The kids even participated in a mock activity where they help others in need. A few of the kids were quite thrilled to be dressed up as Red Cross volunteers – Helmet, lanyard and all! In the grand finale, Veronica gave some excited kiddies some chapsticks and little backpacks from the Red Cross. All in all, it was a very educational and entertaining day!

Members of the Red Cross Club at John F Kennedy held their “Taste of Diversity” potluck Fundraiser. The event was held by their President, Theodore Tran, and his officers in honor of Red Cross month. Theodore spoke to a group of 30 Kennedy students about various lines of service of the Red Cross particularly, the Measles and Rubella Initiative. Students had the chance to purchase the Measles and Rubella pins in order to support the initiative. Here are some of the students showing off their new pins!! 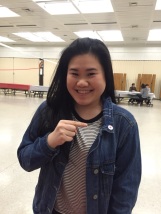 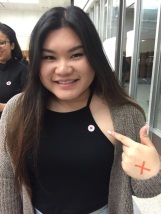 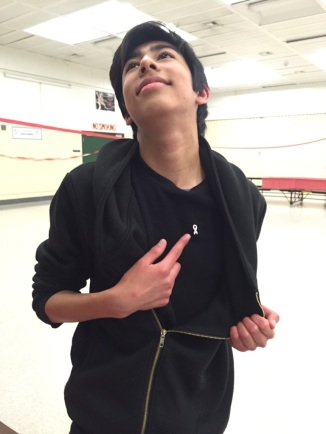 Remember March is Red Cross month!! It is that time of year when the Red Cross celebrates our community heroes. The students of John F Kennedy have shown anyone can make a difference and be a hero!!

Woodland, CA Wednesday, March 9, 2016 — The American Red Cross and thousands of Home Fire Campaign partners have helped save at least 77 lives and installed more than a quarter of a million smoke alarms in homes all across the country since the campaign launched in October of 2014.

“Every day seven people die in a home fire somewhere in the United States. Working with our partners, we are changing that by making people safer with each new smoke alarm we install,” said Robin Friedman Regional Disaster Officer. “The campaign has already helped to save the lives of dozens of people and we know that number will only grow as more alarms are installed and more people take action to prevent home fires.”

Home Fire Campaign supporters and partners here in the Gold Country Region include the following, Pacific Gas and Electric, Oracle, ServPro as well as local and city fire departments.

Daylight Saving Time occurs at 2:00 a.m. Sunday morning, March 13, and the Red Cross reminds everyone to TURN AND TEST – turn their clocks ahead one hour and test their smoke alarms. If someone’s home is lacking smoke alarms, residents should install smoke alarms on every level of the home, inside bedrooms and outside sleeping areas. The alarms should be tested every month and the batteries replaced at least once a year, or according to the alarm manufacturer’s instructions.

Every household should develop a fire escape plan and practice it several times a year and at different times of the day. The plan should include two ways to get out of every room and a place to meet outside. Consider escape ladders for sleeping areas or homes with two stories or more.

People can visit redcross.org/GoldCountry to find out more about how to protect themselves and their loved ones from fire or learn about the location of local smoke alarm installation events. They can also help by volunteering their time or making a donation today to Red Cross Disaster Relief by visiting redcross.org, calling 1-800-RED CROSS.

Check out the Home Fire Campaign Video from the large canvassing event in December.’