There is a self-sufficient resiliency woven into the close knit culture of the people of Calaveras and Amador County. The Butte Wildfire burned hundreds of them out of their homes.

Locals say that they have not seen a fire of this magnitude since 1937. Some of these families have been here for generations and tend to have a deep distrust of government; they prefer to keep to themselves tucked deep into the hills. As a result many are camping on their burned out property accepting help only from trusted friends, family and neighbors.

For the Red Cross this means that we have to seek out these pockets of need to offer whatever assistance we can. We also have to build rapport and trust quickly as many mistakenly associate the Red Cross with government.

Today, one of the many assignments of the integrated care team was to go find a gentleman named Jerry who was camping out where his home used to be. It took about an hour to finally arrive at his camp. Integrated care teams include disaster assessment case workers and health practioners.

When we came upon Jerry, he had heard from neighbors that the Red Cross was out and about trying to help people, so he was upbeat and cheerful as he welcomed us into his camp. He was engaged in spirited conversation with a group of young firefighters who had made it part of their daily routine to check up on him. 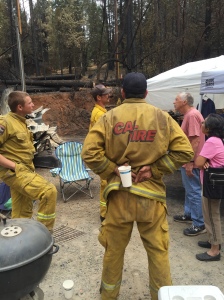 (There are still many Cal Fire teams roaming the area seeking out lingering hot spots.) A visit with Jerry was always a welcome retreat from the rigors of their job. He came to expect them and always made plenty of extra coffee. He offered us some as well as he redirected his attention to our team.

After some initial hesitation he agreed to let us sit down and inventory his needs. It was quickly determined that Jerry was on several prescription medications.  Our nurse took him aside and began going through his entire shoebox full of medications one at a time and discovered that he needed a couple of refills. He was also running low on hearing aid batteries.

Jerry was a Viet Nam veteran and eligible for assistance with his medications, but camped in remote isolation he had no idea that the VA was set up in nearby San Andreas to take care of cases just like Jerrys. Because he is unwilling to leave his property due to looters, the Red Cross offered to advocate on his behalf and get his medications refilled. After the nurse took his blood pressure he rejoined the young firefighters clearly appreciative of the company.

There are countless stories just like Jerry’s requiring strategic “search and rescue missions” by Red Cross integrated care teams. —for Jerry it was just what the doctor ordered.