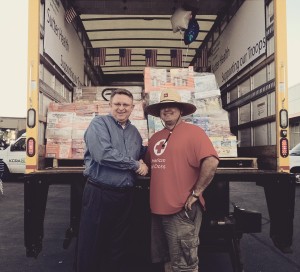 The triple digit temperatures experienced during Operation Care Package didn’t prevent dozens of volunteers and hundreds of community members show incredible support to the second annual collection event in support of our military locally and abroad.

The event held at the Roseville Auto mall on Friday, June 12th was organized by Army Veteran and now Red Crosser Tobrin Hewitt who made sure the lines were straight and the boxes organized as soon as donors were dropping off loads of items outside the Toyota dealership.

The inaugural year was able to gather more than 4,000 care packages for our military members in Afghanistan and Kuwait. This year, we’re expecting to surpass that amount and send care packages for our service members deployed to the Far East in Japan and South Korea as well as to the Stork’s Nest program in the Naval Hospital located in Yokosuka, Japan.

“Opening a care package when you are deployed makes you feel like a million bucks,” said Tobrin Hewitt, Services to the Armed Forces Manager at the Red Cross Gold Country Region. “So, we’re sure to make a lot of our military members not only those deployed but our local veterans feel extra special.”

It was an exhilarating and exciting event, but it was also very hot and we’re grateful to our Red Cross volunteers as well as our partner volunteer groups like Blue Star Moms, Marine Families and Military Families of Yolo County who were sweating it out with us.

The support of our business community is making this event bigger and better each year and we’re grateful to all of our sponsors for their donations to make this event remarkable. We’d like to give a shout-out to Roseville Automall, Sutter Health, UPS, Walmart, Safe Credit Union, Aerojet Rocketdyne, Hanson Bridgett Law Firm, with a very special thanks to KCRA/KQCA for their time and constant promotion of this event live from the event.

Operation Care Package reached a total viewership in our Designated Media Market (DMA) of 545,588 with a total Local Market Publicity Value of $44,468.75.

Check out all the pictures from this awesome event! http://bit.ly/OCP2015

About the American Red Cross Service to the Armed Forces Program.

The American Red Cross’ unwavering commitment to members of the U.S. military, its veterans and their families continues to grow and develop more than a century after Clara Barton first recruited nurses to support the U.S. Army. In the Gold Country Region, we are proud to carry on that legacy of service to the brave men and women of our Armed Forces. For more information, follow us on Twitter @RCSierraDelta or join the conversation on Facebook facebook.com/RCSierraDelta.