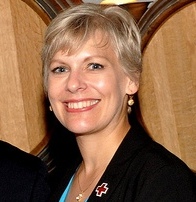 After an extensive search, the American Red Cross Capital Region has announced Kathleen Weis as its new Regional Chief Executive Officer, effective August 6. Weis has served as Interim CEO since March of this year and had been serving as Chief Operating Officer for the Region since 2010.

“It is a tremendous honor to represent the American Red Cross and to lead this team of dedicated staff and volunteers,” said Weis. “The Capital Region has a long and proud history of supporting those impacted by disaster, both in our local communities, across the nation, and around the world. I look forward to continuing in that tradition of excellence, representing the humanitarian mission of the Red Cross and continuing to build a region which sets the standard for delivery of Red Cross services.”

In her new position, Weis will oversee Red Cross services in the Capital Region, a territory consisting of 24 counties throughout Central and Northeastern California. With nearly 4.5 million residents across a broad territory, volunteers are called to respond to an emergency – on average – once every 21 hours. A workforce of over 3,500 volunteers and 40 staff ensure the Red Cross fulfills its mission within the Capital Region.

“When a disaster strike, the Red Cross is there,” says Weis. “What many people may not realize is that the Red Cross is there in their own community every day, beyond the headlines of disasters like Sandy and Oklahoma. Every 21 hours Capital Region volunteers are called to help someone in need. Through our region, thousands of individuals receive lifesaving training everyday. We are also very involved in supporting members of our Armed Forces and their families. I look forward to working with the Region’s dedicated volunteers, employees, board members, and our generous community and corporate partners in providing the Red Cross humanitarian services and lifesaving education to those living and working in our Region, especially the most vulnerable.”

“We are looking forward to having Kathleen join the Capital Region,” said Kim Box, Chair of the Board of Directors for the American Red Cross Capital Region Chapter. “She brings a tremendous amount of experience, knowledge of the community, and a leadership style, which will build upon our strengths and lead us to continued success in meeting the mission of the Red Cross.”

“Kathleen was selected from a pool of enormously talented individuals, all of whom were drawn to the humanitarian mission of the Red Cross,” said Robin Bevier, Chair of the Search Committee and member of the Region’s Board of Directors. “She brings experience in creating resilient and self-sustaining communities, a passion for volunteers, and the thoughtful approach of a well-tested leader. She will no doubt further the Red Cross mission within our community.”

Weis is succeeding Dawn Angelo, who left the Capital Region to accept the CEO position with the American Red Cross of King, Kitsap, and North Mason Counties located in Seattle, Washington.

Weis began her career at the Red Cross in 2004 at National Headquarters in Washington DC. She has served in management and Director positions in Information Technology and most recently as Chief Operating Officer for the Capital Region.

Kathleen holds a Bachelor’s degree in Communications from Michigan State University, and a Master’s degree in Public Services from DePaul University in Chicago.