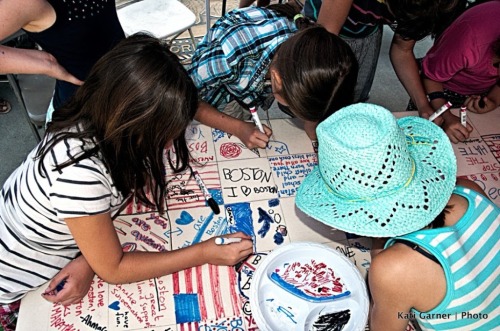 On Friday, June 7, 2013, the Prayer Canvas – a collection of messages and well wishes for those impacted by the recent bombings at the Boston Marathon – stopped by the steps of the State Capitol in Sacramento. The canvas offered Sacramento the chance to extend their sympathies and messages of hope to the city of Boston.

Former Sacramento reporter, Kari Wagner (now residing in Florida), developed the Prayer Canvas as a means to give all people affected and touched by the Boston tragedy an opportunity to extend their thoughts, regardless of the distance.

The Prayer Canvas is currently touring the nation with an ultimate goal of being presented to the City of Boston on the anniversary of the bombings, serving as a memorial to those that were lost and the heroes of that day. Each canvas section measures 73 inches wide and 18 feet long, containing space for 340 messages. When the tour is complete, the finished canvas is expected to be the size of a football field.

Red Cross volunteers joined with representatives of the Sacramento Police and Fire Department to pay tribute to those impacted by the bombings, as well as the volunteers and first responders that stepped in to help.

More information about the Prayer Canvas may be found at www.prayercanvasusa.com