*The following article was published by Congressional Quarterly on Monday, April 8, 2013* 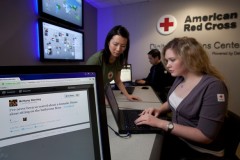 Immediately following the 2010 earthquake in Haiti, the Red Cross was seeing Facebook and Twitter messages posted by survivors saying their family members were trapped beneath the rubble, but the organization that helps people during disasters was largely helpless in the realm of social media.

Today, the Red Cross has attracted more than 923,000 Twitter followers, more than 507,000 Facebook “likes” and roughly 2.4 million downloads of its smartphone apps. The organization has trained a cadre of volunteers to use social media to help those in the midst of an emergency; it tracks online mentions of disasters trending around the world from its Digital Command Center in Washington.

When Senate Homeland Security and Governmental Affairs Chairman Thomas R. Carper toured the command center this month, the Delaware Democrat agreed to promote the agency’s smartphone apps and digital resources, and to urge his colleagues on Capitol Hill to do the same.

Lawmakers have for years been calling for the nation’s disaster response tools to keep up with digital advances and social media trends. Sen. Susan Collins, R-Maine; Rep. Gus Bilirakis, R-Fla.; and Rep. Jeff Denham, R-Calif., all have introduced bills in years past to direct the government to modernize public alerting systems.

The legislators have noted that the nation’s current alert platform was designed 60 years ago, when radio and television were main media sources. Emergency tools should now be designed for devices such as cell phones and tablets, and for sites such as Twitter and Facebook, they argue.

During Carper’s tour this month, the Red Cross showed the chairman the six screens its command center uses to display “heat” maps showing the volume of online conversations occurring about disasters in different regions and streams of mentioned keywords that can tip off officials to downed trees, power outages and people looking for shelter.

Red Cross officials told Carper how they use Twitter to give tips to those posting messages about tornado sirens or wildfire warnings, and how they make sure their messages convey emotional support — an act they call the “digital hug.”

“I am a big believer in hugs,” Carper said after his tour. “Until today, I hadn’t heard of a digital hug. But I felt their digital hug, and it felt good.”

If someone tweets that they want to help their community recover from a disaster, Red Cross workers will suggest they tweet the location of supply vans and shelters so others can track down assistance. When the command center sees tweets about injuries, they reply with first aid tips. And if someone tweets that they’ve heard tornado sirens and are heading to their basement with a bottle of wine, Red Cross workers will tell them not to forget thick-soled shoes, a flashlight and a corkscrew.

“We try to have fun with it,” Laura Howe, Vice President of Public Relations, told Carper. “People expect the Red Cross to be caring and compassionate, so they expect that in the social media space as well.”

The disaster aid agency’s smartphone apps surged in popularity following Hurricane Sandy. The apps — offered for first aid, hurricanes, tornadoes, earthquakes and wildfires — give users a way to track weather conditions with location-based notifications, lists of things they can do to prepare for and recover from a disaster and the locations of nearby Red Cross shelters. Users also can use the apps to send messages to all of their Facebook and Twitter followers, indicating their location and that they are safe.

Harnessing social media tools and digital outreach has also helped the Red Cross fundraise. During the 2010 earthquake in Haiti, the organization raised roughly $32 million through donations made by text message. Years later, the method has caught on so well that the agency sees spikes in text message donations following disasters, even before it begins spreading the word.

Jennifer Scholtes can be reached at jscholtes@cq.com.