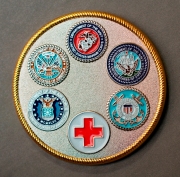 A military tradition which began during World War I, “Challenge Coins” have long been a symbol of honor and appreciation for outstanding service. Often exchanged between military personnel to recognize the actions of each other, the American Red Cross Capital Region Chapter is honored to continue this time-honored tradition.

On Thursday, January 31, 2013, at the Army National Guard Training Center in Sacramento, the Red Cross Tiffany Circle and Legacy Society proudly presented Challenge Coin awards to four local military members in recognition for excellence in service. This event marked the Capital Region Chapter’s first Challenge Coin Awards and welcomed over 150 guests from all branches of the military to pay tribute to the honorees.

Major Kight was commissioned into the U.S. Air Force in 1974, a time when only a small percentage of military officers were female.

In 2010 she was appointed to command the California National Guard.  As the 45th Adjutant General, she became both the first female and the first African-American woman in the nation to hold such a post.

She received several major awards including the Legion of Merit, and retired in 2011 after 37 years of service.

In 1990, then-Captain Currier deployed to Iraq in support of Operation Desert Shield/Desert Storm, supervising a corps holding facility through which several thousand enemy POWs were processed.  At the request of local police, he developed a patrol plan for the City of Al Khobar, which won praise from the police, shopkeepers and senior headquarters.

Deployed to Iraq again in 2005, then-Col. Currier met with civil, military and police leaders at all levels of the Iraqi Government, displaying the rare ability to help parties with divergent interests work toward a common goal, which helped change the way Iraqi police trained.

In 2009, he returned to Iraq in support of Operation Iraqi Freedom where he was responsible for more than 7,800 soldiers in separate sites.

Named as Brigadier General in 2011, he became Commander of the California Army National Guard, with responsibility for more than 17,000 soldiers.  His leadership has helped restore public faith and new trust with Congress, the legislature and the National Guard Bureau, and has lead to vast organizational improvements.

Brigadier General Currier retired from the California  Army National Guard in December 2012 after 36 years. In civilian life, he is a Sacramento County Superior Court Judge.

Philip E. Wagner had bravely volunteered  to serve as a combat pilot in the Army  Air Corps during World War II.  After his plane was shot down in I944 in Ploesti, Romania, he was captured and taken to the Stalag Luft 3 prison camp for nine months.

Along with the other military officers in captivity there, he was interrogated and suffered untold degradations. However, Red Cross care packages sent by Americans helped keep him alive.

As the Germans began to feel the pressure of Allied bombings, these packages became scarcer. Eventually, with heavy snow and temperatures well below freezing, the men were forced to march on a journey two nights and a day to Stalag Luft 7, near Munich.  With bombings day and night, provisions could not get through.

Like many soldiers Phil knew the Red Cross trucks represented hope, and despite the heavy bombing, they somehow managed to bring deliver food.  During those difficult days, Phil made a silent vow to someday remember the Red Cross.

Years later, he kept that promise, and became an annual supporter of the American Red Cross.  Eventually he established the Wagner Family Fund for Red Cross Services to U.S. Armed Forces, Veterans and their Families. He feels he is paying a debt, fulfilling the vow he made when the Red Cross was there for him and his buddies.

Master Chief Aviation Machinist Technician Kerry Kriske has served his nation with honor and distinction for more than 29 years.

During his expansive career he has flown thousands of hours, sometimes searching for mariners lost at sea, but more often helping to fight the nation’s war on drugs in remote, third-world locations.

In advancing leadership roles, he oversaw more than 400 people maintaining aircraft, always assuring they were properly trained and cared for.

In his final tour here in Sacramento, he has been responsible for the welfare of all enlisted personnel on the base.  He is also an active volunteer, delivering meals to homebound seniors and benefits to homeless veterans.